Playing around with a fork a Kossell.

I couldn’t resist getting in on that $150 free for first time order deal from Misumi  I wound  up getting 20 2 meter 1515 aluminum extrusions  and some nuts and bolts   A guy at the hackerspace that I go to has a Kossel clear is really a sweet machine.   It gives giving me an itch to make another printer.    What I really like the Kossel in general is that it look pretty  cool.   I was really was impressed with  the Bowden extruders.  I really like the idea of getting the mass of the stepper driver out of the system..  supposed the down side of the system there is some springiness for the hobbed wheel being

My  Rockbot is working well but, I think would be nice to get everything moving faster.   I hind site I think it would  be nice to get get some of the mass out of the system so I could push the motors harder.   I had always intended for the rockbot to be a dual head extruder.. I’m wondering if I could use it to print out parts for the Kossell and then do a small production run on some Bowden type heads.

When I build my Rockbot I optimized on speed and quality, so I wasn’t paying attention to what it cost me to build.   I probably haven enough angle aluminum and 3/4 square material to build another 2-3 rockbots.

So.. In this iteration, since I have a functioning printer and no deadline, my basic optimization is quality and price.. Iow’s I think I’m going to take my time on this one.

So.. I was looking at the basic  Kossel. I like the look but It seems like it has some high cost with the linear rails and the steel frame.
Then I was looking at the Kossel clear It is a clever design,  Its either aluminium or plexiglas.. I like how they rotated the rails 45 degrees and mount the bearings.  Although, I wonder if I got some I got some square aluminium tube and glued some ptfe on it and slid it over the square aluminium,  I’d be curious how that would work..
I was playing around with the solid model with the Kossel solid and tried rototating a few things and I want to put a tapered Plug screwed down with the cap.  The problem with this is to clear the cap the belt the will be too far from the center line.  Another thing on my mind is I’ve been collecting a bunch of stepper motors and they are necessarily Nema 17  This as me thinking on a bunch of fronts.    I real tempted to mount some bearings and then direct couple a motor with a torque arm on it.. 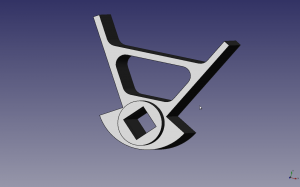