Exciting things happen in freecad Ver.17 and down the Rabbit hole we go.

I’m a long time Freecad user but  I’ve been staying away from the bleeding edge of development since the stable build basically worked and suited my needs.  I have had way too many irons in the fire in my life for a while and I’ve been attempting to avoid the rabbit holes as well as the blinky lights of distraction for what I want to get done.

Most of my area of my limited free-time focus has been on getting my MPCNC to work with Machinekit as well a a semi-secret(at the moment) project I’m planning on Kickstarting.    The sultry calls of the sirens of the .17 daily build of FreeCAD have been getting louder.

The work that’s being done on the freeCAD Path workbench is frankly darn impressive and development has been very rapid.   The version from the Ubuntu repository I had been using was more than a   1000+ commits behind the bleeding edge of development of the  daily-build.  So that basically got me into .17 build.    I really like what’s going on with this stuff, so at this point, so it’s worth it to me to invest some time, since I’m not planning on looking back( I hope I don’t regret this)

My other fun project is a DIY linear bearing project that I’ve been iterating for the last couple of years.  I’m in the rev “L” series at the moment. Here’s a sneak peak. 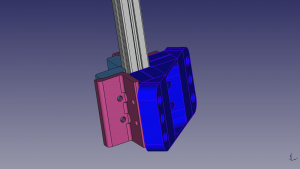 Prototype Linear bearing for the Wedgie

I’ve gotten comfortable to the idiosyncrasies of pre .17 Part Design and can work around them and saw no compelling reason to really change.
Well that’s what I was telling myself anyway.

So, I wanted to do another variant to my L series bearing and I wound up  using the daily build of .17 which I was using for Path.

There have been some major changes as you can see from the Release Notes.   Basically, the part design workbench have had a major revamp.  The most significant to me are the new  Body and Part containers.   This is a huge paradigm shift that got me feeling like a total beginner at the moment.   Unfortunately the dust hasn’t settled yet since there is still very active development, and the documentation on this stuff is a bit scattered at the moment.
There are some of the new things that you’ll be able to do.

I need to wrap my head around this, and as I figure it out and get used to it, hope to do a few blog post/videos about this.