Research notes and such and fixing some flaws.

I thought I had my saddle and z-axis rail modifications  looking about how I want them.  That got me looking at the next step at making the bearing mounts for the ball screws. In the process of writing this post I game across some minor flaws. Basically I’m going to have a clearance issue between the tapered gib and the ball nut on the x-axis.  In addition, not really a flaw, but I didn’t think about it, I’m going to loose a small amount of travel on the x-axis.  Also, I had some issues with my pulleys coming about the table.

I was poking around the Nook website for inspiration.
http://www.nookindustries.com/Nook3DPS/index.cfm?action=model&model=BallLeadScrew

In one of the pages of Nook, they say it is not a good idea to mount the ball tube return upside down.  Up is the best, side is secondary and upside down is a no-no. (I kind of thought that but chose to ignore that since it fixed my clearance issues) 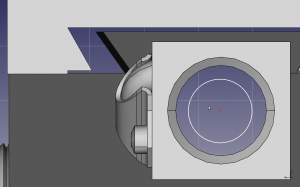 When I rotated the nut 90 things start getting really tight.  The issue that I’m having is that I think the tapered gib and the ball tube return are going to get in the way of each other.    I don’t want to translate the axis of the x-axis leadscrew.  If I push it down, that means I need to push the y-down.   The thing is, that I was going to use the existing saddle as a template to set the angle it move the tapered gib so I don’t want to move the gib to the opposite side.  Actually, this sort of cool that I’m modelled this before cutting chips.  I think the solution is that  I flip the ball nut on the opposite side.  It just dawned on me that if I want to keep the full travel of the original Sherline, that I would need to have the screw stick out past the end of the table equal to the length of the ball screw..  Well, that’s not going to happen, so the x-travel is going to reduced by the length of the ball nut. 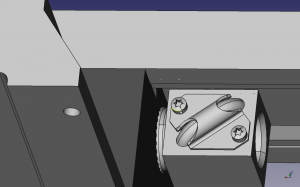 http://ixian.ca/server/timing_belt_specs.pdf  !!! On this site this guy machines his column in his lathe.  Which is a really good Idea.  I was at a loss on how I could do this with the equipment I have.   This sight is really interesting and he has done a huge amount of modding. He doesn’t want to be linked to unfortunately and I’m now getting redirected.

If I want with the same reduction as a 1/4-20 screw lead screw, I would need about a 4:1 reduction.  I was able to find a 62 tooth pulley from SDP, which would do the trick.

To get down to .05/Inch .2/.05 I need to a reduction .25 which means a 64 tooth pulley. The closest I can get is is a 62(Aluminium) or a 60 Pulley Plastic.  When I did a preliminary layout of the pulleys, I didn’t like what I was seeing.. The pulley OD of the table is way too close to the top of the table.  The belt will probably bring it over the top.   So, I don’t think that’s going to work.
I figured that sticking with the same reduction was a way for me having to deal with whether my system has enough ompth..  Using a  ball nut and ball bearing support is going to be significantly more efficient then what I had going on before this,so I think I have a little bit more lattitude with the reduction.    I was just going to go with this, but heck, I run a quick calculation.

Ok the existing sherline system is a 1/4-20 threaded 60 V-thread rod.  This is entirely appropriate for a hand cranked manual mill, but this thread form isn’t exactly helping the cause when you having motors driving the system.   I initially thought about retrofitting with a acme thread but ball screws are far cooler and more efficient. 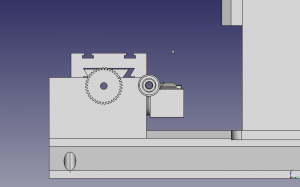 The efficiency I see quoted for Ball screws is 90%.  So I’m thinking that if I reduce the pulley ratio 50%, I’m still going to have the same resultant pulley force, plus I’m going to double my rapid speed  (Works for me).  The only downside  is my loss of step resolution, which I don’t think is that big of a deal, since I have micro-stepping with my driver.   But still It would be nice to have that step resolution.  Once of the things that I noticed is that the bore size shrinks with the smaller number of teeth. 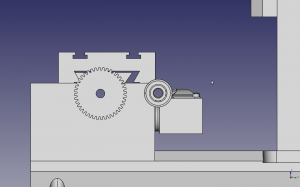 So I need to figure out the center distance. Here’s an on line calculator http://www.sdp-si.com/cd/default.htm